Top budget writers – Sen. Harry Brown (R-Onslow/Jones) and Rep. Nelson Dollar (R-Wake) – held a joint press conference on Thursday to announce a package of line-items that have been agreed upon in the General Assembly’s budget.

During his time at he lectern, Sen. Brown said budget writers were adding correctional officers to the list of eligible recipients of the LODD benefit and added that the payout would double to $100,000 from $50,000. Increasing the benefit was a part of PFFPNC’s legislative requests to the General Assembly and to add more cancers to the program.

“Increasing the benefit payout has always been a cornerstone of our agenda, but we thought it would not be possible until we got all fire fighter cancers funded in the program,” said PFFPNC Political Director Josh Smith. “PFFPNC is appreciative to the General Assembly for doubling the LODD payout to $100,000 and we applaud budget writers for making fallen fire fighters, first responders, correctional officers and their families a priority.”

A final budget is expected to be released over the Memorial Day weekend. PFFPNC is on the lookout for any additional fire fighter cancers that may be covered by LODD. 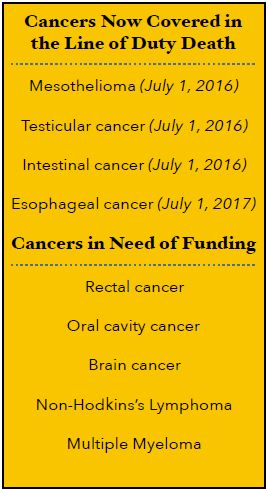 The House and Senate will begin votes on the nearly $24 billion spending plan on Tuesday and Wednesday in committees and has floor votes scheduled for Thursday and Friday.

The budget will then go to Governor Roy Cooper and he is expected to veto it. The General Assembly will likely take a veto override vote in mid June.

PFFPNC has been told the General Assembly will take up policy bills the first week in June. PFFPNC’s top priority is the enactment of HB340 | Separation Allowance for Fire Fighters.