If you follow PFFPNC DVP Scott Mullins on Twitter, you’ll notice he’s stirring it up over the disproportionate number of fire fighters getting cancer, something he’s been working on since 2015 when PFFPNC introduced presumptive workers compensation legislation at the General Assembly.

Now Mullins has a focus on Asheville policymakers, and he’s gotten the attention of Asheville Mayor Esther Manheimer, who met him on Friday, Jan. 12, to discuss how the city can better support fire fighters in the effort to prevent cancer. 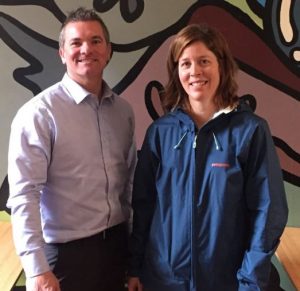 “Fire fighters know the risks of the job,” said Mullins, a captain in the Asheville Fire Department. “We run into burning buildings and if the flames don’t kill us, the residue left on our turnout gear that we wear on every call can. But, we should never neglect precautionary steps that can save our lives.”

Mullins is advocating for an extra set of turnout gear that a fire fighter can rotate as the other set is cleaned as a minimal and necessary step.

PFFPNC Political Director Josh Smith said Mullins is the personification of how the organization’s political work should work.

“Scott not only drives to Raleigh on his days off to meet with legislators to tell very personal stories about Asheville colleagues fighting these fire fighter cancers but he also takes that message to local leaders,” Smith said. “He is a bulldog for this profession and an example of how we need to be in every local across the state.”

Mullins and Mayor Manheimer are planning a follow-up meeting on cancer prevention in Asheville. She has requested more information and Mullins is collecting it now.

*This article first appeared in the Jan. 12 edition of the PFFPNC Legislative Briefing.