The 2017 Professional Fire Fighters and Paramedics Convention got off to a great start on Monday.

Mike Williams, President, Local 2961, Jacksonville, and Carolina Beach Fire Chief Alan Griffin welcomed us.  PFFPNC President Tom Brewer gave opening remarks, encouraging Locals to talk to one another. He said over the next few days we will talk about ways you can work with your fire chiefs and local politicians. If you don’t believe it’s possible within your department, Brewer encouraged talking to Wilmington or Greensboro or Raleigh and hear stories that prove you can make a difference. 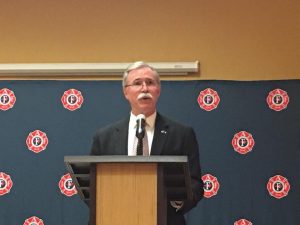 Rep. Dennis Riddell, who was a key supporter in getting cancer line of duty death benefits pasted in legislation

Sec./Tres. and Political Director Josh Smith along with New Frame’s Brian Lewis gave an update on our legislative accomplishments and goals. Among our 2018 goals are:

We also heard from Rep. Dennis Riddell, who was a key supporter in getting cancer line of duty death benefits pasted in legislation. Riddell thanked fire fighters and paramedics for putting their lives on the line daily.  He also said he has our back and is working hard on getting more cancers added to legislation.

Our message we need to share with our senators to get HB 340 passed: PEP – parity, economics and performance. We deserve what police officers have. We need to help getting our older fire fighters retired because we know it’s tougher the older you get and the risk of cancer is higher.

Day 1 concluded with a late-fill resolution and district caucuses. Voting on all resolutions will take place later in convention.