Day 2 of the PFFPNC Convention included some fantastic guests and presentations. 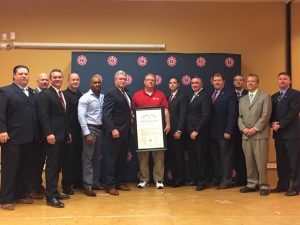 The morning began with Rep. Holly Grange from District 20 addressing the crowd. Rep. Grange is a former member of the U.S. Army Core of Engineers. She talked about some core values she lives by and acknowledge fire fighters and paramedics do too: Loyalty, Respect, Honor, Integrity and Personal Courage.

Following Rep. Grange, we were honored to hear from IAFF General President Harold Schaitberger. He talked about a number of things including our political presence, the growth of the IAFF and the newly opened IAFF Center for Excellence for Behavioral Health Treatment and Recovery.  President Schaitberger emphasized that post traumatic stress is an occupational injury not a disorder. He assured members that the IAFF would be there to help with depression, suicidal thoughts and alcohol and drug addictions.

President Schaitberger also assured the PFFPNC that he and the IAFF have our backs also on the political front both in our efforts and financially. He encouraged us to stay involved with local and state politics and congratulated us on our efforts so far.

We also heard from IAFF General Secretary/Treasurer Ed Kelly. He went over the financial status of the IAFF and said the Union is in great financial standing. He also talked about the IAFF PAC and encouraged more from PFFPNC to donate to the international PAC.

President Schaitberger and S/T Kelly were on hand to present Morrisville with their charter and welcomed them to the IAFF.

We also heard from Greensboro’s Vinnie Messina on social media and branding.

Keynote speaker Lt. Gov. Dan Forest took the stage around 1 p.m. and spoke to the crowd about efforts being made in Raleigh and how we can work together. He invited us to work together on getting HB 340 through the Senate.

“Politics is a game of compromise,” he told the crowd. “There’s not an issue that anyone has that we can’t work on.”

He ended by saying his office is always open and he is happy to talk about any issues.

You can watch the beginning of his address on our Facebook page.

There will be one election this year for a two-year trustee position.  The nominees are Curtis Collins, Jeremy King and Vinnie Messina. Voting will take place starting at 8 a.m. tomorrow until convention starts at 9 a.m.