For the first time since 2000, Fayetteville fire fighters will see either substantial pay raises or bonuses after a hard-fought battle with the Fayetteville City Council. 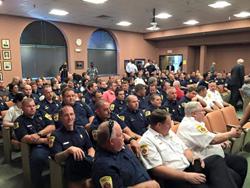 Fayetteville Local 1873 was in the forefront of the battle, in particularly by starting Fire Ops 101 to educate its elected officials.

Throughout the last few months, members of Local 1873, as well as the department, stayed strong and mature as city council questioned how hard the fire fighters actually worked and why they deserved pay increases.

“We are very passionate about what do,” said Frank Kocsis, president of the Fayetteville Professional Firefighters Association IAFF Local 1873. “The statements we heard from our bosses were very hurtful … But we knew we had to react in a positive way, which was very difficult because we had to take the emotion out of it.”

Fayetteville City Council approved a general fund budget on Monday, June 8, that includes a plan for pay raises that lower-ranked fire fighters and new hires can expect to see over their careers. Some fire fighters will receive upwards of a five percent increase in pay, while everyone will get no less than two percent. Ranked captains up to chiefs will get bonuses ranging from $500 to $1,000. The approved budget also included a one percent city contribution of employees salaries to their 401K – a first for the city.

Since 2006, the Fayetteville Police Department has had a more generous pay step plan, according to local media. Also in 2009, police officers received pay raises while fire fighters got nothing.

The battle with the city council was not without drama and often included snippy shots from the city council. However, under Kocsis’ leadership, members of Local 1873 and the department took the high road and were able to get their message across while staying mature.

“Often times our Chief’s hands were tied, so the Union stepped up to educate elected officials on the job we do,” Kocsis said. “We offered Fire Ops 101 to city council to educate them, and less than a week after it started, the statements of inadequacy stopped.”

In addition to the pay increases, the department got a public apology and one council member praised fire fighters for their professionalism.

Brewer said it was inspiring to see nearly 100 fire fighters, their spouses, kids and retirees attending city council meetings in a show of solidarity.

“The members of the Fayetteville Local and fire department show what can happen when we stand together and get active,” Brewer said. “I am tremendously proud and inspired by everyone coming together. Hopefully Fayetteville can build on this, and we can all learn from this.”

The ordeal, while not over, is a success and example of achievement. Kocsis thanks fellow Local 1873 members and PFFPNC Locals and E-board members for their support. He was also surprised and humbled but the citizen’s support, as well.

There’s still work to be done in Fayetteville. Local 1873 plans to stay focus on getting fair compensation and benefits for all fire fighters.

“This has been 15 years in the making and it’s not going to get solved in 15 days or even 15 months for that matter,” Kocsis said. “But the people are listening to us, and we don’t want to see that door close.”