The 2019 PFFPNC convention got off to a great start on Monday with numerous speakers, legislative updates and more. Speakers included Gov. Roy Cooper who addressed the convention on Veteran’s Day saying, “I know you have a dangerous job not only because you can get hurt but because you can get sick because of the work you do. Municipalities should have your back.” 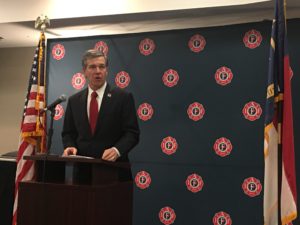 “It seems pretty simple; we have an issue, a problem – let’s fix it. We’ll continue to work hard to find a solution and get a solution across the finish line,” Sen. Perry said.

Sen. Perry is working on getting LODD and presumptive cancer bills updated, improved and most importantly passed.

Delegates also got an update on the legislative agenda with PFFPNC Political Director Josh Smith and New Frame’s Brian Lewis. The four big areas of legislative on our agenda are LODD benefits, separation allowance, presumptive cancer/PTSD and motorcycle license plates. We are making process getting more cancers added to LODD benefits and will continue to fight for the rights of fire fighters.

There will be an election Wednesday for three trustees positions. Nominees are Joey Welborn, Jerry Wiggins, Vinnie Messina and Ryan Merrill.

A few resolutions also were passed including the endorsement of Harold Schaitberger for IAFF president, Ed Kelly for Gen. Sec./Tres. and Walt Dix for DVP at next year’s IAFF convention.

Monday evening includes a PAC fundraising event at The Davie.

Convention will resume at 9 a.m. Tuesday. Speakers include Schaitberger and Kelly.