The second day of the 2019 PFFPNC convention continued with another group of great speakers and educational presentations. 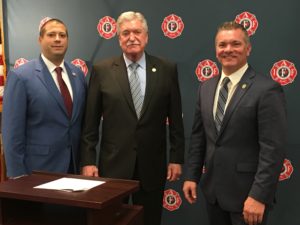 IAFF president Harold Schaitberger first addressed the crowd. He updated delegates of the growth of the union, particularly in North Carolina. He also touched on politics stating that IAFF supports both sides of the party line, supporting those that stand with fire fighters and first responders.

“Continue your growth in numbers and continue your political influence,” Schaitberger encouraged.

“You need an insurance commissioner, a state fire marshal that supports an increase in your pension, collective bargaining and works every day to support you,” Goodwin said.

The day continued with a district update from Walt Dix and two presentations. Todd LeDuc spoke on cancer in the fire service and encouraged delegates to continue fighting for presumptive care. He also said not to ignore two other deadly causes to fire fighter death: cardiac failure and suicide.

The day concluded with a few more read and passed resolutions.

Tuesday evening includes an event for the PFFPNC charitable fund and gun raffle.

Wednesday will include the election of three trustees, the reading and voting of final resolutions and election of the 2023 convention location.