The General Assembly passed a $25.9 billion bipartisan budget this week that included $15 million in funding over two years for PFFPNC’s Firefighters Fighting Cancer Act of 2021.

Governor Roy Cooper signed the bipartisan budget bill on Thursday afternoon, minutes after the final vote in the NC House. The presumptive cancer law goes into effect January 1, 2022. PFFPNC President Scott Mullins, who wrote the legislation with PFFPNC lobbyist/attorney Skye David, was elated to learn the news on Monday night when the budget was first released. 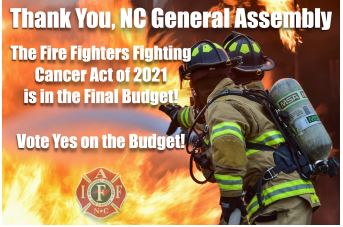 “After years of working on this presumptive cancer bill, it is a relief to see the General Assembly enact this important and life-saving legislation,” said Mullins. “From the bottom of my heart, I am so grateful to the strong and steadfast leadership of the North Carolina House and all of our friends in the Senate who worked behind the scenes to make this possible.”

He also noted that the Senate version of the presumptive cancer bill filed by Senators Todd Johnson (R-Union) and Jim Perry (Wayne/Lenoir) made it possible for the House position to prevail in final budget negotiations.

PFFPNC Political Director Josh Smith stressed the important role these legislators played in PFFPNC’s strategy in 2021. “We knew that we had to write a new bill that doesn’t use workers compensation, run a concurrent Senate strategy with our House plan, and have it all converge in the final days of budget negotiations,” Smith said.

Mullins said he is humbled by the outpouring of appreciation from firefighters and their families, fire chiefs, legislators, the media, and North Carolina citizens who are thanking PFFPNC for writing House Bill 535 and executing a strategy to get the language in the final budget. “I think about all the firefighters who have been diagnosed with this terrible disease,” he said. “This win is about them and the firefighters who come behind them.”