On balance, PFFPNC had a solid day on Super Tuesday from the top of the ballot down to the General Assembly races and on both sides of political aisle. 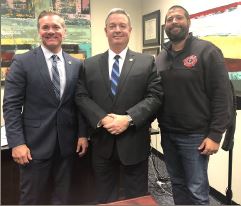 At the top of PFFPNC’s watch list was the North Carolina Senate race in Wayne and Lenoir counties, where Sen. Jim Perry was in a battle with a fellow Republican candidate who took cheap shots at fire fighters in the closing days of the campaign. Perry, photographed with PFFPNC President Scott Mullins and Political Director Josh Smith, defeated his opponent by a 66-34 percent margin.

“Senator Perry is a friend to fire fighters and is working hard for us in the Senate, particularly on presumptive cancer, so his race was a top priority for PFFPNC,” Mullins said. “And it was icing on the cake to see a candidate go down who attacks fire fighters in mail pieces. It made knocking on 2,000 doors and working polls on election day for Senator Perry so much more worth it.”

PFFPNC went on to win most of its General Assembly races including Rep. Jon Hardister (R-Guilford), Rep. Bobby Hanig (R-Dare/Pamlico/Currituck/Hyde), Rep. Michael Wray (D-Halifax/Northampton), Rep. Dennis Riddell (R-Alamance) and Rep. Jamie Boles (R-Moore). The only General Assembly losses for fire fighters Tuesday night was Mark Hollo, a Republican, who was running for NC Senate in Catawba and Alexander counties, and Ben Scales, a Democrat, running for the NC Senate in Buncombe County.

At the Council of State level, PFFPNC had a split decision for its endorsed candidates in the races for Lieutenant Governor. Sen. Terry Van Duyn (D-Buncombe) qualified for a runoff election in the Democratic primary and Republican Greg Gebhardt lost.

In federal races, the IAFF’s endorsed presidential candidate Joe Biden, now the front runner, had a historical night on Tuesday by sweeping the southern states, showing surprise wins in Minnesota and Massachusetts and holding to a very strong second place finish in California.