The Senate announced its version of the $25 billion state budget on Tuesday and it included a $235,000 Line of Duty Death benefit expansion of oral cavity and pharynx cancers, the exact line-item proposed by the House in its budget on May 1. 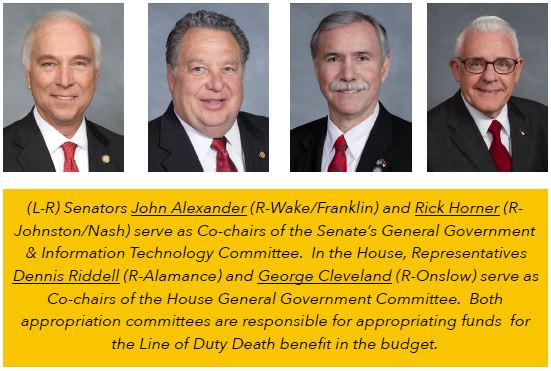 While the House and Senate agree on the LODD line-item, there are sizable differences between the two chambers on the rest of the spending plan and those differences will be negotiated over the next month as the July 1 fiscal year approaches. PFFPNC’s focus is to make sure this agreement sticks in the final spending plan.

If the agreement between the chambers stays intact, the number of cancers covered by the Line of Duty Death benefit will grow to six of nine fire fighter cancers. In addition to oral cavity and pharnyx cancer proposed in this year’s House and Senate budget proposal, the Line of Duty Death benefit already includes mesothelioma, testicular cancer and cancer of the small intestine (added in 2016); and esophageal (added in 2017). In 20018, PFFPNC took the opportunity to double the LODD from $50,000 per death to $100,000 per death, but added no new cancers.

“This is the first time the Senate has ever proposed expanding the Line of Duty Death benefit in its initial budget proposal,” said PFFPNC Political Director Josh Smith. “We are so grateful to the chairs in both the Senate and House for proposing these expansions and for coming to an agreement so early in the process.”

PFFPNC President Tom Brewer added, “These LODD benefits will help families recover at a time when many families are devastated not only by an illness that takes a loved one, but also an illness that leaves them in financial ruin.”